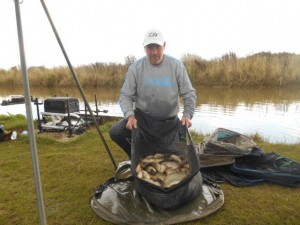 Well with the rain settled in for the day, there was still some hardcore anglers out there. Lee Feary (Westwood Lakes) has added another lake to his collection with smashing the current record on swallow . Lee was on peg 2 and fished pellets down the edge to catch a mixed bag of f1’s and Carp to weigh 261lb 6oz. In second was Roy Wells (Westwood Lakes ) from peg 6 who under armed a method feeder to weigh 147lb 4oz. In third was Chris Weddell (Westwood Lakes) from peg 9 with 134lb 12oz.