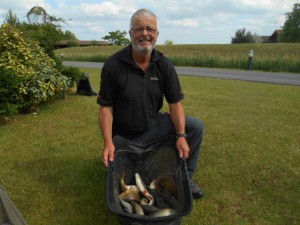 Angler’s are having to work harder for there fish now on Skylark Lake, as the night’s close in and temperatures drop. Rick Tweddle (Baitech) found the fish though on Peg 1, weighing 58lbs 1oz to win the Over 50’s open Match today. Rick fished at 11 metres and down the track at 5 metres to catch a mixed bag of fish on red maggot. In second was Denis Jones (Westwood Lakes) Peg 23 with 55lbs 4oz. Third placed angler was Ian Hughes (Westwood Lakes) Peg 29 with 44lbs 8oz.