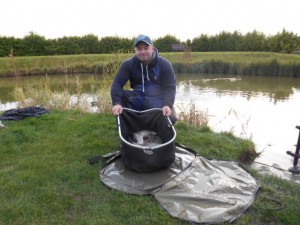 The first overnight frost of the season, never put the fish off from feeding today on Hawk Lake. Steve Reid (Garbolino RAF) was victorious from Peg 10 with a winning weight of 88lbs 0oz. Steve fished bronze maggot down the track to catch a mixed bag of fish. In second was Steve Lane (Maruyku/WWLakes) on Golden Peg 1, just missing out by ounces with a weight of 87lbs 6oz. Third placed angler was Paul Harsley (Daves Peg) Peg 14 with 71lbs 8oz.