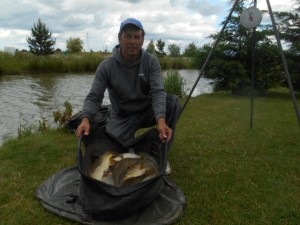 With it being a warm day today there was going to be some good weights on the cards, for the anglers. Tony Evans (Westwood Lakes) took the win today from peg 20 fishing worms and casters across to the bridge . Also some extra bonus fish on paste late on down the inside. Tony weighed inn 184lb 10oz to take the win. In second Place was Adam swain (Dynamite Baits) catching on pellets across to weigh inn 147lb 10oz peg 2. Steve lane (Westwood Lakes) was third from peg 13 with 141lb 14oz.