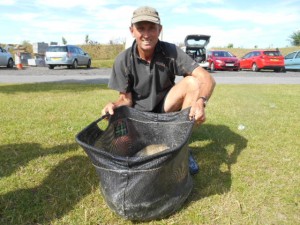 With the return of Summer, anglers enjoyed a good day on Skylark Lake. The ever reliable Mick Stamp (Preston/Sonubaits) was on Peg 13, which proved to be lucky for Mick as he won the match with 129lbs 15oz. Mick fished tight across to the island on expander pellet to catch mainly Carp. In second was Charlie Clay (Westwood Lakes) Peg 17 with 119lbs 1oz. Third placed angler was Steve Lane (Maruyku/WWLakes) Peg 28 with 115lbs 10oz.

Next Sunday’s Open Match is on Skylark Lake.