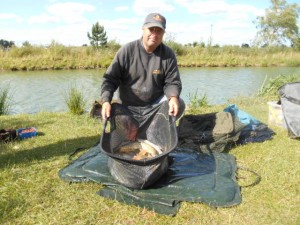 Steve Lane (Maruyku/WWLakes) drew the £200 Golden Peg 35, and made sure he went home richer by winning with 100lbs 11oz. Steve fished maggot down the edge to catch mainly Carp and some Barbel late on. In second was Mick Stamp (Preston/Sonubaits) Peg 30 with 94lbs 3oz. Third placed angler was Ron Buckley (Westwood Lakes) Peg 15 with 91lbs 3oz.