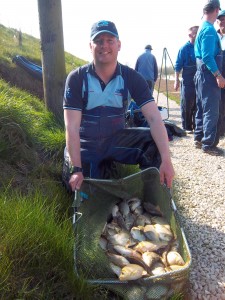 Graham Welton with his winning catch.

A well attended RAF Match on Osprey today with 22 anglers taking part.  With the F1 Carp in a ravenous mood, there was plenty of fish caught along the whole match length.  Graham Welton came out on top with 99lbs 12oz of F1’s all caught on the far shelf with red maggot on the hook.  In second was Danny Hurst with 85lbs 14oz and Alan Dyer was third with 80lbs 4oz.