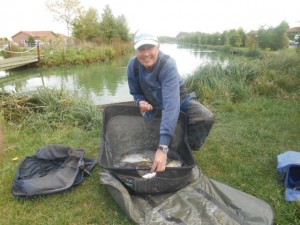 With the colder nights, catches were slightly down for today’s Over 50’s Open Match. Jeff Duggan (Westwood Lakes) found plenty of fish on Peg 17, to weigh 71lbs 11oz for the win. Jeff fished in the margins with pellet and maggot to catch a mixed bag of fish. In second was Dave Robinson (Westwood Lakes) Peg 29 68lbs 6oz. Third placed angler was Rick Tweddle (Baitech) Peg 38 with 57lbs 3oz.