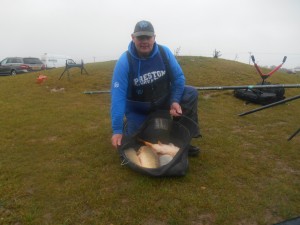 Thirty anglers turned out for today’s Open Match on Falcon Lake in the Spring like weather. Paul Harsley (Daves Peg) fished across on pellet to catch F1 Carp in his winning total of 106lbs 8oz from Peg 25. In second was Luke Morley (Westwood Lakes) Peg 47 with 103lbs 0oz. Third placed angler was Adam Swain (Sensas A4) Peg 23 with 102lbs 0oz.