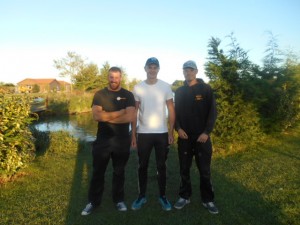 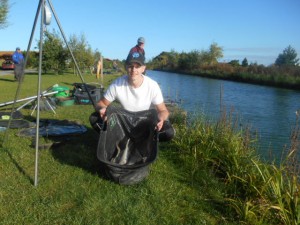 The anglers could not of wished for a better weekend weather wise, with glorious Autumn sunshine on both days of the Westwood Lakes Two Day £1000 Final. Fifty eight anglers turned out for this prestigious event, all qualifying to fish from winning the numerous Open Matches held at Westwood Lakes throughout the year, culminating in this two day fish off to decide the overall champion. Day one see the anglers draw randomly to either fish on Skylark Lake or Falcon Lake in five man sections. On Falcon Lake Jimmy Brookes (Middy) was on Peg 25, and fished shallow on a top kit to win the lake with 166lbs 6oz of F1 Carp on banded pellet. Skylark Lake was a little harder with anglers trying lots of methods to tempt the fish. Janusz Kedzierski (Westwood Lakes) won the lake from Peg 15 with 117lbs 7oz fishing tight in the margins with red maggot to catch a mixed bag of fish. With several anglers on one point going into Day Two on the Sunday, there was everything to fish for, and a tense second day was well on the cards.

Day two and the anglers all swap lakes today. Both on Skylark and Falcon Lake some of the anglers on one point had drew in the same section. James Howarth (Tri-cast Highfield) was on Peg 34, and had Jimmy Brooks (Middy) on the next Peg 35. Just to make it even more interesting Carl Lee Hopps (Westwood Lakes) was on end peg in the section Peg 40 all on one point from the previous day. At the weigh in James Howarth got the nod to win his section with 94lbs 6oz, to score the perfect score of two points. This was only enough to put James second overall. On the other side of Skylark on Peg 11 almost opposite James, was Davis Gurton (Westwood Lakes) who had already weighed in 100lbs 0oz. Davis had fished tight across on pellet and maggot to catch a mixed bag of fish. This gave Davis the perfect score of two points also, and with his weight from his shallow fishing on Falcon Lake of 160lbs 10oz of F1 Carp the previous day,  he was crowned Champion for 2015. Davis got the title by default on weight, with over 60lbs to spare over James Howarth.