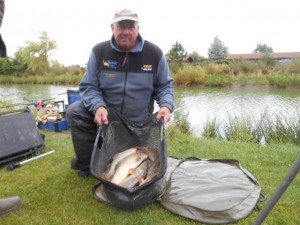 Persistent rain from the start never thwarted the fish from feeding. Drawn on Peg 5 Ade Freeman (Got Baits) caught well from the start and won with 116lbs 3oz. Ade fished across to the island with expander pellet over 4mm feed pellet and down the margins late on to catch Carp to 6lbs. In second was Brian Harding (Baitech/WWLakes) Peg 9 with 107lbs 5oz. Third placed angler was Christian Clay (Westwood Lakes) Peg 3 with 97lbs 9oz.