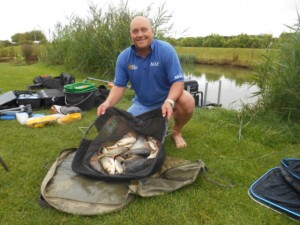 With a distinct chill in the air and no sign of a indian summer, 14 anglers fished today’s Open Match on Hawk Lake. Matt Pillay (MAP/Old Ghost) was on Peg 2 and with no one on Peg 1, duly set about amassing a winning total of 111lbs 8oz. Matt caught on pellet across and down the margins to catch mainly Carp. In second was Richard Kerridge (Westwood Lakes) Peg 15 with 83lbs 4oz.  Third placed angler was Paul Turner (Westwood Lakes) Peg 19 with 72lbs 3oz.