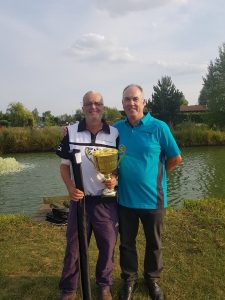 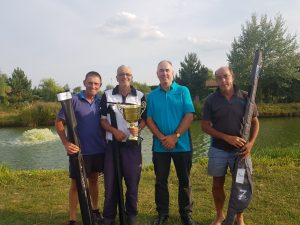 The Drennan Over 50’s three day Festival hosted by Westwood Lakes, see 108 anglers take to the banks in the glorious sunshine of Summer.  Sponsored by Drennan who kindly donated tackle prizes for the top ten anglers, and presented on Thursday night by 5 times  World Champion Alan Scotthorne.

Day One produced some big weights from the four lakes used Skylark, Swallow, Osprey and Falcon.  Over on Osprey lake Mick Stamp put 188lbs 8oz on the scales of F1 Carp caught shallow and down the edge on pellet to win the section.  Barry Bush won the lake with 204lbs 0oz of F1’s caught shallow.  Swallow lake fished well with some big Carp into double figures showing.  Ady Gathercole put 144lbs 8oz on the scales to win his section.  Very close on Skylark Lake with Richard Kinnersley on end peg weighing 218lbs 8oz of mainly Carp caught mainly down the margins. Dave Dawber had 212lbs 8oz and Andy Lumb weighed in 200lbs exactly.  Falcon Lake was another close run affair, with Paul Cartledge catching 148lbs 12oz to just get the nod from Roger Parnell who weighed 147lbs 6oz.  Rick Tweddle won his section with 131lbs 0oz.

Day Two and all the angler’s rotate to another lake for today’s battle.  Richard Kinnersley leading the way on the results board from day one, was drawn on Falcon lake and duly obliged to win his section with 171lbs 12oz of F1 Carp.  Rick Tweddle put 200lbs 12oz on the scales to win the lake on Osprey keeping up his good form of late.  Not to be out done was Mick Stamp on Skylark Lake fishing across and down the margin to catch some quality Carp to 8lbs and win the lake with 220lbs 6oz, putting him top of the leader board going into the last day.  Roy Wells fished the feeder on Swallow Lake to win the section with 134lbs 0oz, including Carp to 14lbs.

Day Three and five angler’s all on 2pts making the final day anybody’s guess who would come out the eventual winner.  Mick Stamp went to Falcon lake top of the leader board and fancied to do well from Peg 37.  Barry Bush on the next peg had other idea’s though and put 200lbs 10oz on the scales to take the vital point and beat Mick Stamp’s 168lbs 14oz.  Similar story for Richard Kinnersley on Osprey lake despite putting 170lbs 10oz on the scales, he had to settle for second in section.  Steve Holdsworth taking the section with 182lbs 2oz and the vital point lost for Richard.  Andy Lumb finishing fourth in a tight section on Swallow with 116lbs 8oz, left it wide open for the two anglers left on 2 points.  Drawn in the same section on Skylark lake peg for peg was Bob Smith peg 33 and Rick Tweddle peg 34 both on 2pts.  Rick fished tight across and caught well in his margins late on with mainly Carp to win the section and the festival overall with the perfect 3 points.  Rick is the first angler to win a three day festival at Westwood Lakes out right with 3 points and no weight count back.

A massive well done from Westwood Lakes, Drennan the sponsors and all the angler’s in the festival.  So well deserved to a fantastic man and angler.