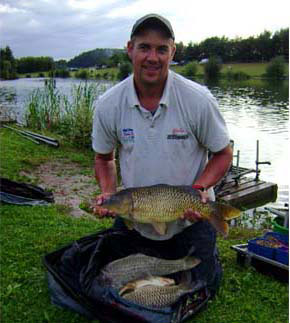 Well what an exciting last 3 days it has been with some really tight sections, but also some unexpected weights. The weather might of effected the fishing a little bit with the change in temperature but all the anglers adapted to this. With the rotation draw being done on the Monday afternoon by our staff this gave everyone the chance to know where they was going to be for the next 3 days, either Skylark, Falcon or Osprey Lake.

With a windy day ahead the fishing was going to be a struggle with presentation being the key. On Osprey lake it saw a lot of the anglers starting short on pellets down the margins to catch a quick burst of fish. Rob Pennington was able to keep a nice flow of fish down his inside most of the day on peg 2 to take the overall lake win with 102lb 4oz. Skylark saw a number of different tactics being used with the odd angler trying to hold it across to catch them bonus carp. Which paid off for Chris Lattimer on peg 26, fishing maggots down the bottom of the far shelf to take the lake win with 91lb. Over on Falcon pellets were the key with with all 3 section winners catching down the margins. Steve Parry won the lake from peg 46 with 88lb 8oz.
Day One
Osprey
Osprey Section One              Ryan Lidguard  82lbs 2oz
Osprey Section Two              Ross Harold  82lbs 4oz
Osprey Section Three           Carl Lee Hopps  72lbs 10oz
Osprey Lake Winner              Rob Pennington  102lbs 4oz

With the lakes fishing hard on the first day we was hoping for some better weights today. Osprey lake was a struggle due to the wind blowing straight down the lake, Luke Sears made the right choice by fishing down his edges with maggots and groundbait to catch f1’s and barbel for the lake win with 99lb 2oz from peg 9. Falcon Lake saw Chris Weddle who won his section on the first day, fishing a tidy match to take the lake with 75lb 0oz from peg 14 putting him and a perfect 2 points going into the last day. Skylark lake was unreal with Andy Bennett on peg 31 showing a masterclass on dobbing bread at 11.5m to catch carp to 10lb giving him that mighty lake win with 175lb 0oz. But more interesting on Skylark was Carl Lee Hopps with his section win putting him joint 1st over the two days.

With the overall looking really tight with only points deciding between the top 10 it was all to play for. Half way through the match Chris Weddle and Carl Lee Hopps were really struggling in the sections. But on Skylark Lake Luke Sears looked like he was running away with the festival, but was it going to be enough at the weigh in. Osprey fished really hard with no ripple on the water but Adam Southgate search about nicking odd fish on pellets to win the lake with 38lb 10oz from peg 6. Falcon Lake saw Ryan Lidgard on peg 44 catching on maggots short to weigh in 59lb 12oz. Skylark amazed again with Jack Danby dobbing bread on peg 30 to weigh 196lb 4oz for a lake win and top weight of the festival.

The Results
Coming to the results it was really tight with only a point in it for first, But Luke Sears was crowned the Westwood Lakes Daiwa Autumn Classic Winner 2018 with 4pts and a total weight of 241lb 8oz. We would just like to say a massive thank you to everyone who attended the event and also a big thank you to Daiwa for another year of sponsoring the festival hoping it will continue. For any information regarding the May Spring Classic Festival or the November Autmun Classic Festival please contact us on 01205 724162 and select option 1 also tickets are now on sale!!!